Wanderlust in the City: An Auckland Yoga Festival

Wanderlust in the City: An Auckland Yoga Festival

We didn’t know what to expect, but little did we know that passionate ninja yoga and high octane acrobatics would be on the cards at the Wanderlust in the City yoga festival in Auckland.

It was a glorious hot and sunny day, as my friend Louise and I made our way to the gorgeous lakeside setting of Western Springs park to experience Wanderlust’s first event on New Zealand shores, following the company’s success in the US. 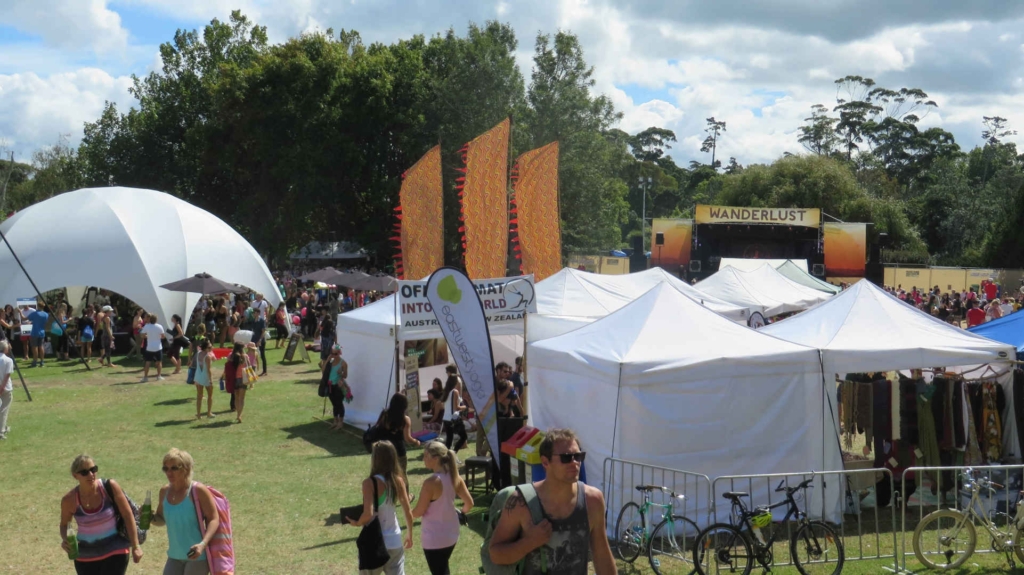 As we approached the site, we could already see that there was a true festival vibe, with a buzz of people enjoying the sunshine and browsing the stalls. The ‘speakeasy’ tent was surrounded by a crowd, listening intently to the line-up of speakers and leaders in achieving health, happiness and wellbeing. At the main stage, a kundalini yoga workshop was being held as a throng of lycra-clad yogis took to their mats, being guided to gently ease, stretch and release into the day’s practice.

The stalls included a host of local yoga centres and organisations, a chiropractic college offering free spine health checks, and retailers offering eco and alternative clothing and giftware; perfect for whiling away your time between sessions. An array of healthy and tasty food options were available, including Café Hanoi, where we enjoyed delicious marinated pork and lemongrass wraps and ginger and lime kingfish skewers.

There was an easy, free-spirited vibe to this event, and every so often you would see impromptu yoga moves – including a very cute two-year-old showing off her downward dog pose – and couples practising their acro yoga skills. 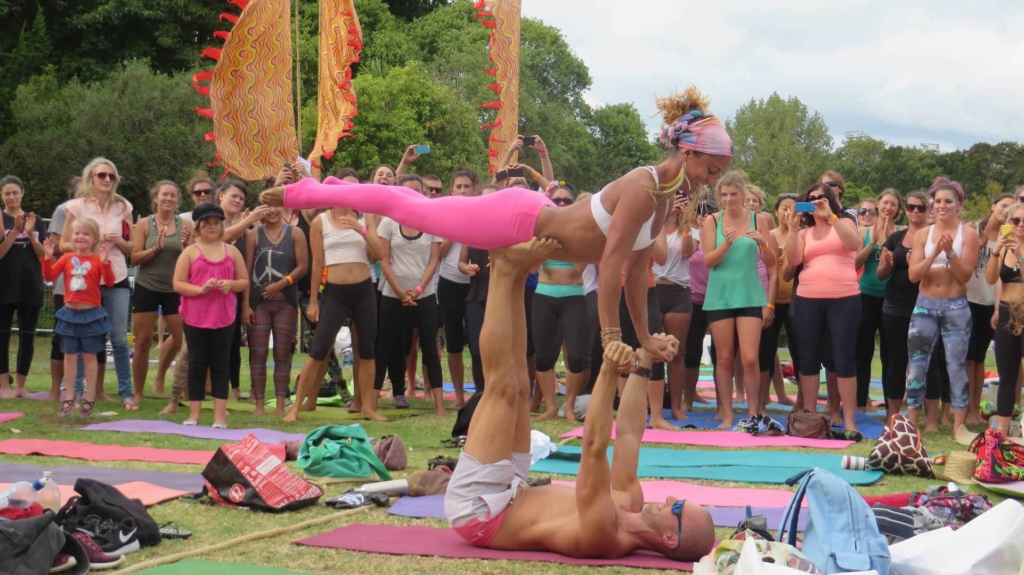 Then it was time for our class. We collected our wristbands for this free session – wonderfully, almost everything at this festival was for free – and laid down our mats facing the main stage. Unfortunately there was a small hiccup as one of the festival’s guest teachers couldn’t make it, but the organisers handled it smoothly. Instead we were led by Urban Ashram’s Nikki Ralston, who treated us to an exuberant vinyasa flow session, performed to the awesome tunes of DJ Ria on the decks. As we stretched out in our warrior poses, she gave a hint of what was to come by urging us to channel our inner ninja warrior.

The day’s big surprise was a session at the main stage hosted by the charismatic Cameron Shayne, founder of the Budokon movement – a fusion between yoga and martial arts. Confident, and with more than a little swagger, he led with a muscular yet artistically beautiful flow of asanas. What set him apart was how he spoke, encouraging us to move sensually into each posture, as if it were a particularly dynamic session of lovemaking. As he received appreciative yelps of joy from the women in the crowd, like he was a rock star god on a world tour, Louise and I looked at each other and smiled. This was yoga, but not as we know it. As we progressed into the warrior poses, he upped the ante and brought out the ninja power in each of us. This was not a time for gentle meditation and contemplation, but pure strength and determination. 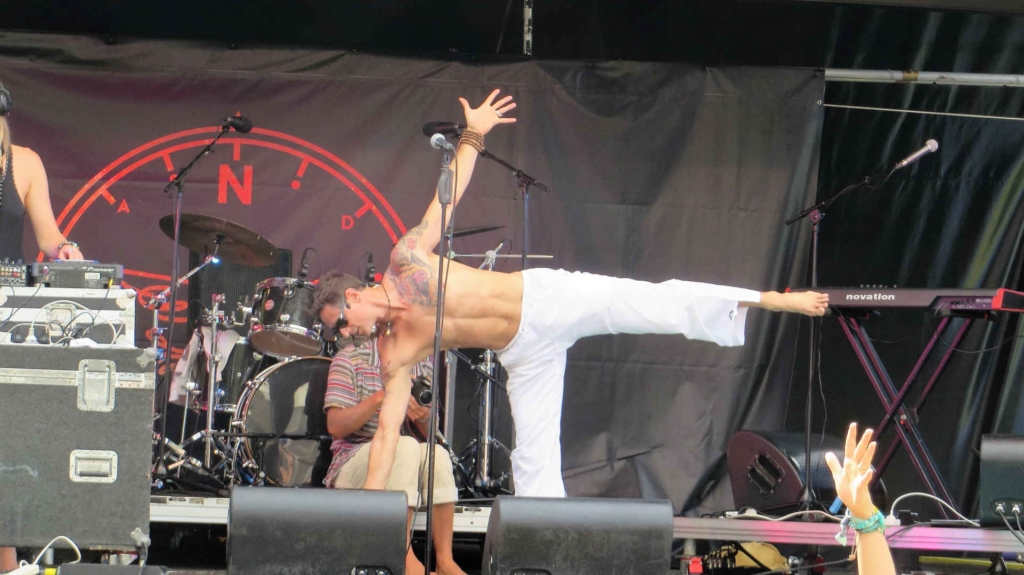 After the yoga wrapped up, it was time to let loose and strut our stuff to the DJ’s tunes. Cameron led the way, rocking out to the music, and urging us all to free ourselves of our inhibitions and move the way we felt like to the music, saying “Let’s make some bad choices this afternoon… we’re all gonna go for it, let ourselves go and do something we’ll probably regret later on. Yeah!” 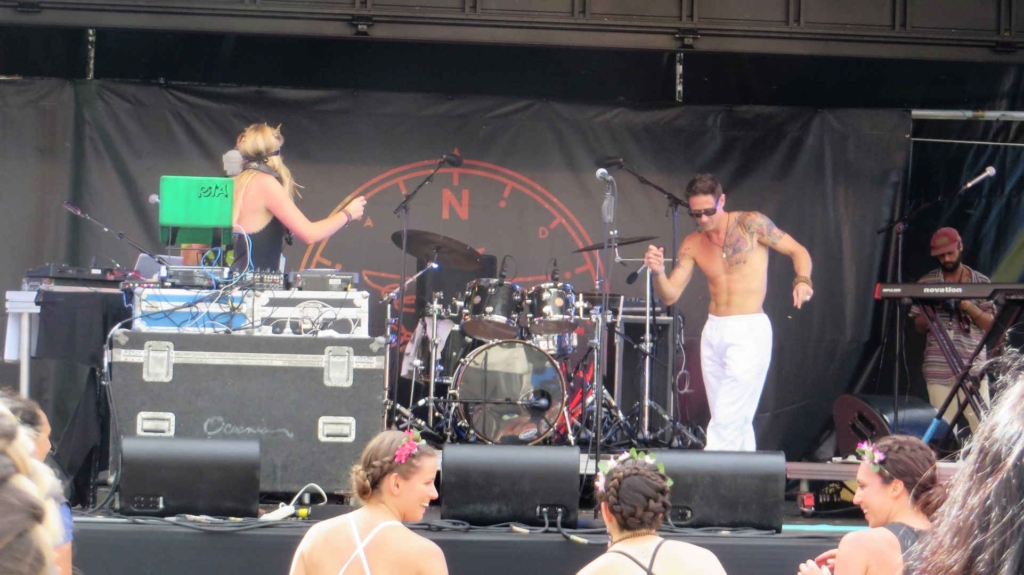 Following this free-spirited dancing, which had left us smiling and happy, he asked us to form a large circle in preparation for an acro yoga performance by Claudine and Honza from Sydney’s Yoga Beyond school. Everyone cheered as one little girl unexpectedly took it upon herself to show us her dance moves in the centre of the ring. She certainly wasn’t troubled by any inhibition. The acro yoga was more than impressive, as the tunes continued and the crowd clapped along. The atmosphere was electric. Cameron naturally took things a step further, with a jaw-dropping running jump and dive over the pair – quite the climax.

An evening bar – appropriately named Winederlust – was on hand to supply the alcohol as the loosened up crowd enjoyed a soulful live music performance from Kiwi songstress Ladi6. Grabbing a real fruit ice-cream on our way out, we spotted another acrobatic couple displaying their skilled yoga moves high up on a trapeze-like frame. There was a lot of talent on show here.

It had been a wonderful and thoroughly entertaining day and, with a turn out of more than 3,500 yoga enthusiasts young and old, it bodes well for Wanderlust’s first venture Down Under. They plan to return to New Zealand next year with a four-day yoga extravaganza in Taupo.

In the mean time, I will continue to channel my inner ninja yogi. 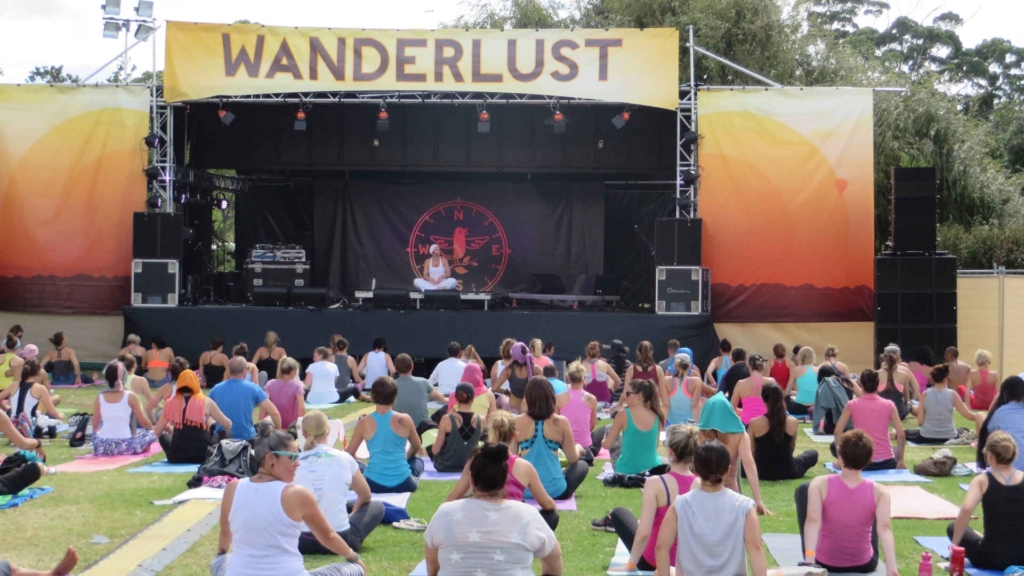 I am excited to be attending another big event on New Zealand’s yoga calendar next weekend: the third International Yoga Festival. Held at the Kawai Purapura yoga and wellness retreat centre on Auckland’s North Shore, it promises an impressive line-up of a wide variety of yoga workshops for all interests, including paddleboard yoga and aerial yoga, as well as chi kung, kirtan, Thai yoga massage and much more.

Now, read my round up of all the top places in the world to practice yoga when you’re travelling, here.

Hi! I’m Claire, a British writer and PR specialist. In 2013, I left my media career in London to follow my dream of travelling around the world and it changed my life. Read more here.

Other third-party cookies are used to analyse and understand how you use this website. These cookies will only be stored in your browser with your consent and you have the option to opt out. However, opting out of some of these cookies may affect your browsing experience.
Privacy Overview

Other third-party cookies are used to analyse and understand how you use this website. These cookies will only be stored in your browser with your consent and you have the option to opt out. However, opting out of some of these cookies may affect your browsing experience.